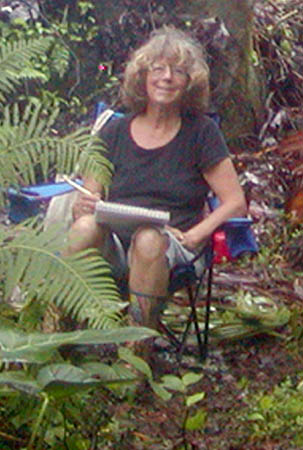 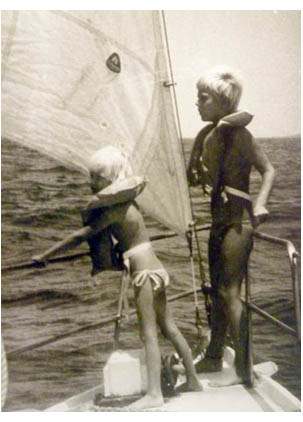 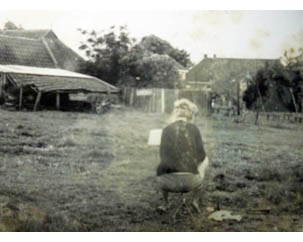 Heleen as a teenager painting in Gorinchem

Heleen Cornet was born in Holland. She obtained a degree in education and a masters degree in fine arts from the Academy of Fine Arts in Amersfoort (Holland). After having lived for a couple of years in Norway she moved in 1975 to Bonaire (Neth. Antilles). There she taught fine arts at the high school for nine years. After living for one year in Curacao and St. Maarten she moved in 1986 to Saba were she was an art teacher at the Saba Comprehensive School for 3 years. Together with her husband Tom vant Hof and two children she has made Saba her residence ever since.

Heleen opened her own gallery and published several books together with her husband marine biologist Tom vant Hof for the marine parks of Bonaire, Curacao and Saba  for which she did the illustrations. The books Saban Cottages and Echoes of the Past are illustrated with watercolors of the picturesque historical houses on the Caribbean islands Saba and Saint Eustatius.

Initially only working in watercolor Heleen decided the paper was getting too small which made her switch to oil after studying this medium in Amsterdam with well-known artist Rik Lina. Lately, after discovering the advantages of watercolor canvas she renovated her style, less realistic, more colorful, using the unpredictable creativity of this medium. At the moment she paints mostly in oil but for her plein air paintings she still uses watercolor. Acrylic paint was alsi added as a great outdoor medium.

Heleen can be found regularly in Sabas cloud forest  were she makes drawings of the dramatic rain forest. She camped on the mountain for more than four weeks. These drawings have resulted in big oil and watercolor on canvas paintings.

Heleen also did a mural in the Sacred Heart Church, a Roman Catholic Church in the Bottom on Saba.  Here she combined rainforest scenes with religious symbols.

Another source of inspiration for Heleen is the underwater world of Saba. Diving together with her husband in the pristine crystal clear Caribbean Sea she made drawings underwater. The series of dolphin paintings and other underwater creatures is the result.

Cornet was asked for prestigious exhibits where she participated with installations of rainforests and the deep sea world as there is the: 1st, 2nd and 3rd  Biennial, Santo. Domingo, Republica Dominicana and, the 23rd Bienal International, San Paulo, Brazil.